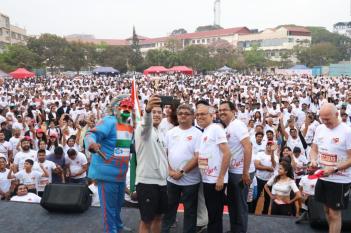 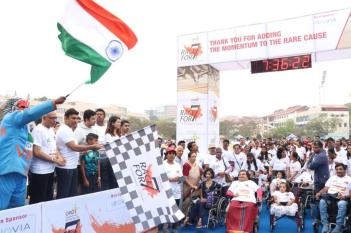 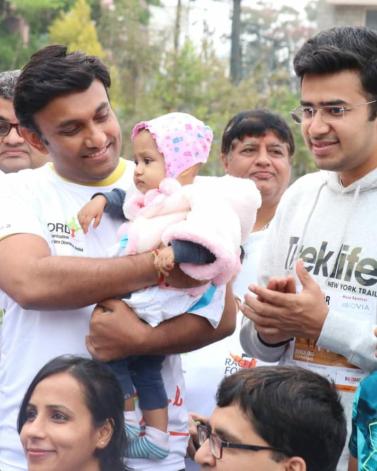 Bangalore, February 23, 2020: Racefor7, an initiative championed by the Organization for Rare Diseases India (ORDI), was organized in Bangalore today to raise awareness for the rare disease community. Shri. Tejasvi Surya, Member of parliament, Dr. K. Sudhakar, Minister of Medical Education of Karnataka; Smt. Shwetha R Prasad, Actress and Mr. John Dodd, Senior Director- IQVIA  flagged-off the run and joined hundreds of Bangaloreans, who participated in the run to show they Care for Rare. Racefor7, a first of its kind event for rare diseases in the world, symbolically represents 7000 rare diseases with 7000 people running for 7 kilometers to represent the average number of years it takes to diagnose a rare disease.

“They may be called rare but 70 million rare disease patients in India is not a number we can afford to ignore. We all need to work together to create a more inclusive society for the rare disease community. Racefor7 has my complete support as do all the patients and their families,” said [Shri. Tejasvi Surya, Member of parliament and Smt. Shwetha R Prasad, Actress  and Mr. John Dodd, Senior Director- IQVIA] .

Although an estimated 1 in 20 Indians suffers from a rare disease, lack of awareness and information has created several challenges for patients and their caregivers, most importantly delayed diagnosis, affordable and targeted care and treatment and access. Besides members of the general public, several rare disease patients and their families participated in Racefor7 to draw attention to the challenges faced by rare disease patients, especially children, and the urgency for governments and other institutions to recognize their unique needs and create enabling policies and a more supportive environment for them.

“IQVIA is delighted to be associated for the fifth consecutive year as the main sponsor of Racefor7. Racefor7 is a unique way of engaging the community with those who matter most –patients and their caregivers – for a common cause. It is imperative that the society and government understand and address the needs of these rare disease patients. We hope that the public will come forward in large numbers to participate in Racefor7 and help amplify the voice of the rare disease community,” said Amit Mookim, Managing Director, IQVIA – South Asia. Rare Diseases is a key therapeutic focus for IQVIA who has provided clinical services for more than 258 rare disease studies in 87 countries worldwide since 2011.

Dr Meenakshi Bhat – Consultant – Clinical Genetics – Centre for Human Genetics in Bengaluru, “As a medical specialist, I come across many families who have waited months to years for a correct diagnosis and to know what to do next. In India, awareness about rare diseases is low not only in the general public but also among doctors. This is because genetics is a very small part of the MBBS curriculum in most medical colleges. Awareness has to increase because early diagnosis helps in treating the patient early to avoid disability. In some conditions where specific treatment is available, the best results are achieved if they begin early, especially to avoid brain damage. This endeavor is aimed at sensitizing the public about rare diseases and also to highlight some of the difficulties that families face on a daily basis.”

Prasanna added the importance of having a rare disease policy and an Orphan drug Policy for holistic management of Rare Diseases for patients, in the absence of any health care policy /insurance coverage and to support the Industry to develop newer drugs and research respectively.

Founded in Feb 2014, ORDI is a patient centered non-profit organization with the mission to improve health of patients with rare diseases across India through awareness, advocacy, collaborations and information dissemination. ORDI represents the collective voice of all patients with rare diseases in India to effect government policy making. ORDI has identified and taken on the grand challenges facing the rare diseases community in India and is committed to systematically and holistically addressing those challenges.